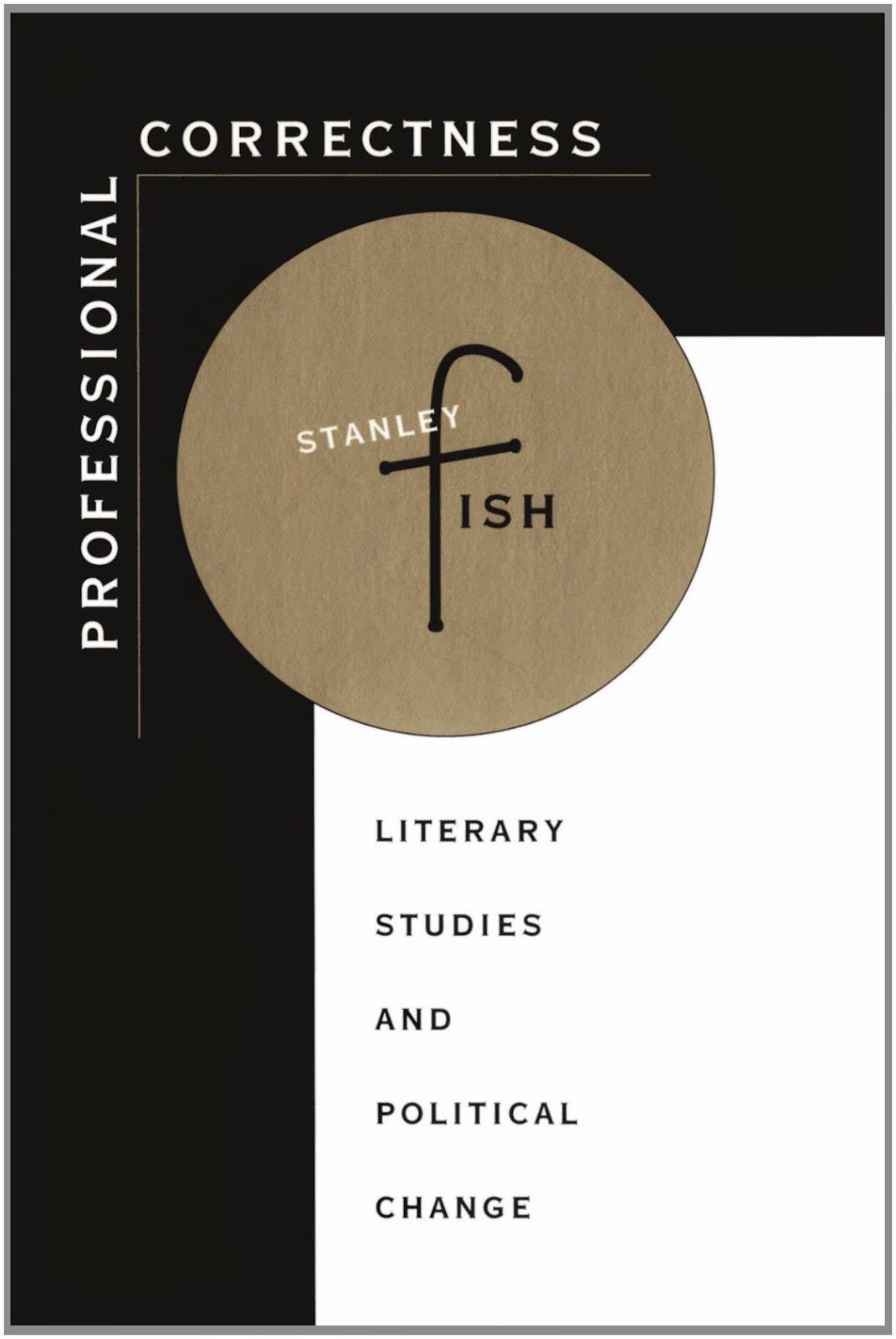 In his book, Professional Correctness: Literary Studies and Political Change[1], Stanley Fish argues against the epistemological and political agendas of cultural studies, as being without justification and understanding in their treatment of the discipline of literary studies and ‘interdisciplinarity’. The strength of his critique is apparent in his internal knowledge and defence of the discipline of literary studies, as being essentially different and distinct as a discipline, from that of cultural studies. While there is great strength to his critique, there are also weaknesses. One of those weaknesses, I will argue, is his refusal to acknowledge the growing influence of external forces outside and increasingly inside the discipline of literary criticism.
Fish argues in favour of a return to the practice of literary criticism in and for itself, free from the political concerns associated with cultural studies. The political or cultural studies approach, in his opinion, is founded upon the mistaken belief that truth is elsewhere and not in the text. The critique is primarily against those cultural studies proponents who see theory as possessing the capacity for revolution and social change. Their aspirations stemming from the ‘mistaken’ belief, that their revised theoretical and epistemological procedures are capable of influencing important political practices. Fish rejects the sense that theoretical debate and discourse causes change; however, he does acknowledge the possibility of ‘theory talk’ as being a catalyst in other areas outside the discipline of origin. His point is essentially that once it becomes part of something other than its origin, theory loses its claim to that discipline e.g., literary theory used for cultural studies, becomes cultural theory. Intent governs content.
The relationship between discourse and belief, interpretation and practice, and the pursuance of truth, are the driving ideological forces behind Fish’s critique of cultural studies aspirations. The interaction and differences, that characterise disciplinary activity between these theoretical relationships, give Fish his definition of a discipline. This, in turn, provides the basis for his argument against criticism that comes from academic fronts that are not as definable (e.g. cultural studies).
Fish’s argument against interdisciplinarity rests on his notion of ‘difference’ as being not just a characteristic of disciplines, but an essential and necessary part of a discipline’s distinct identity. It is that which distinguishes theory as unique and self-defining, as part of a disciplinary practice, that resists its incorporation into appropriated roles within other disciplines. The purpose of literary theory and its internal facts, vocabularies, objects, values, and other ‘’various discursive formations . . . will of course always be a particular one’’(72). This particularity of specifics, and the ‘job’ of disciplinary practices (and) or theory, is what makes it different (and therefore distinct because of its differences).
That essential nature and intent, according to Fish, makes disciplinary function ‘’useful and appropriate for purposes and what is good for one purpose may not be so for another’’(73). The assertion is logically strong and well defended against interdisciplinary demands. However, it also (as cultural studies critics see it) supports the interpretation of an underlying agenda of autonomy, exclusiveness, and therefore a certain amount of unintentional stagnancy in its presentation and justification to the outside world.
A weakness of this kind of critique is that it seems to assume full understanding of the human condition. The constrictive and analytic discourse implies that only lesser understanding of an ‘unintelligible’ kind exists, other than that of the author. His uncompromising authorial tone borders on the verge of sounding ‘autonomous’ unto itself. Fish defines an enterprise that can ‘’make good’’ on its claim that it is ‘’uniquely qualified to perform a specific task’’(19), as being ‘autonomous’. This autonomy is however ‘’not autonomous in the sense of having no affiliations with or debts to other enterprises’’. Because, for Fish ‘’that would be an impossible requirement, which if met, would result in a practice wholly lacking in interest and human intelligibility’’(20).
Rather, he suggests, an enterprise will be ‘’autonomous in the sense of having primary responsibility for doing a job that society wants done’’. Here he makes a claim about disciplines that contradicts his own defence, and is non-affiliatory in nature, refusing to be in allegiance with any discipline other than literary criticism. It also presumes that respect for the discipline, is presently valued by society. I feel that Fish does not convincingly justify the discipline of literary criticism to a public audience, because of this presumptuousness that seems to remain unchecked throughout his critique. Even in his summary of his lectures (and Professional Correctness), he still maintains no need to justify literary criticism’s place amongst the growing public (as opposed to private) academies:

"Justifications, however, are never available from the outside . . . when all is said and done, there is no reason for any discipline or enterprise to exist except for what is brought into the world by the possibility of its practice. What you gain by maintaining an enterprise is the very special and specific pleasures and consolations it affords. They should be thought of neither as the vehicles of our salvation nor as obstacles to it; they are what they are and so are we (140-141)."

While I agree that there are ‘pleasures and consolations’ gained from maintaining disciplines as they are and have been, I disagree that we can dismiss the changing nature of the world outside, and its effect upon, the institution of education. Society’s ever increasing reliance on tertiary qualifications, as an entry into the world of employment, negates the statically staunch position of academics such as Fish. If his only justification for the discipline of literary criticism, to continue operating as such, is that it is for personal and consolatory purposes, then this in my opinion is a weakness in his critique of other disciplinary aspirations that do take these factors into account.
Within Professional Correctness, there is a definite feeling of reproachfulness, toward cultural studies critique that appears to disrespect, or resent, literary studies as a distinctive and socially viable discipline. Through the power of persuasion, Fish subtly uses this apparent lack of respect, to mark those proponents of cultural studies, as without integrity and principles of true cultural tolerance toward other disciplines and therefore other cultures. This affront, that Fish consistently emphasises, has the effect of rendering the project of ‘true’ cultural studies potentially null and void. This insight into the core and guiding principle of cultural studies, being that of tolerance, provides Fish with the ammunition to fortify the integrity and validity of his own discipline. His position is validly strong and poignantly essential to his critique, of the epistemological and political aspirations of cultural studies, as a distinct discipline. While there is obvious strength and logic, to this underlying critique of cultural studies fidelity to itself, it also shows how analytically devoid of moral principles literary criticism can be.