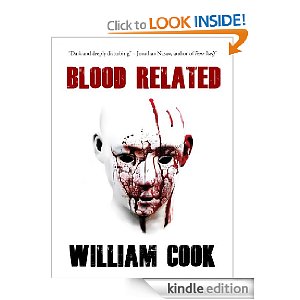 5.0 out of 5 stars The Family That Slays Together Becomes a Legend,
By
Bruce J. Blanchard "Darkenwulf" (Des Moines, IA) -
This review is from: Blood Related (Kindle Edition)
It started off so simple. Dr. Mary Brunswick was the court appointed psychologist to define the state of mind of one Charlie Cunningham. During the course of her talks with Charlie, she meets his twin, Caleb. Caleb consults her later on and tells her a story she will not forget, a story of violence, murder, abuse, mutilation, insanity, abduction, and conspiracy. A story that covers a family background beginning with Grandfather Samael, father Errol, and his two sons Charlie and Caleb. What begins as a subplot and gains an increasing importance is a family feud between the Cunninghams and the Trumans, a family of cops and those who don't mind flying over the dictates of the law. What becomes more disturbing is this: as you read through the book, who are you rooting for - the long length of crimes commited by those in the death house on Artaud Avenue or the less than legal obsession by Ray Truman who will use any means to wipe out the family and their crimes.

The main character is Caleb. He and brother Charlie have been abused by both father Errol and mother Vera. They've been raised in an environment of murder, death, and torture. Throughout the story we identify with Caleb: his actions (mostly despicable), his feelings about his family relations, and a seemingly growing insanity fueled by drugs and alcohol. What remains is a story you can follow with Caleb's entries and excerpts from newspapers and crime books. Blood Related is an awesome and ambitious project in the ways and means of the psychopathic mind. A lot of us are looking for answers as why people kill the others around them and do the inhumane. Blood Related may help you in your quest, though the answers aren't easy ones.
This book is one that should Never be overlooked.