Hi everyone. As it is fast approaching Christmas and the end of the year, I thought it would be a good idea to have a book giveaway for my readers (new and old alike). 2015 is going to be a busy year for me and I hope to be able to produce many more quality books that my readers will enjoy. I will also be branching out into new genre territory with a collection of scary stories for Young Adult readers, a collection of spooky stories for children and my first literary fiction novel. For those of you who like my adult horror, don't worry, there will be plenty more in the new year ahead. I also have a thriller novel and short-fiction series on the boil which, all going well, should be ready to release in the second half of 2015. In order for me to tell you when new releases, giveaways and other cool stuff is happening, please subscribe now to stay in touch. In the meantime - here is how to grab your freebie!

1. Be one of the first ten NEW subscribers to this website and you will receive (by email) a code which will enable you to download for free, my popular collection of short horror stories - 'Dreams of Thanatos: Collected Macabre Tales.'

2. If you are already a subscriber, please indicate so below in the comments that you have already subscribed to this website and I'll email you a copy as a thank-you for your support.

Promotion now finished - thanks for downloading. If you did grab one or more of these freebies and enjoyed it - hopefully you'll return the Christmas cheer and drop a brief (but fair) review on Amazon or Goodreads. If there are any other stories you'd like to see me write I'm more than open for suggestions etc. Just leave a comment below. Hope you all have a great week.


Hi everyone, hope you've all had a great week and are on-track for a good holiday ahead. I have decided to list three free titles on Amazon for you this weekend to add to your TBR kindle queue. The first is a small poetry collection called Moment of Freedom: Selected Poetry - it has received very good reviews since publication and is currently sitting at #1 in the Amazon Kindle store category for 'Good & Evil.' To whet your appetite, here is one of the reviews:

"5.0 out of 5 stars The New Modernism
April 1, 2013 By Anthony Servante
Format:Kindle Edition


Reviewed in the Servante of Darkness Blog

William Cook joins the Modernism School of Poetry. From Wiki: "For the modernists, it was essential to move away from the merely personal towards an intellectual statement that poetry could make about the world." Thus William combines a writing style of prose and poetry to weave an intellectual tapestry, slipping his words in and out of subjective and objective observations, pulling and pushing the reader to envision the completed tapestry while savoring the in's and out's of the words themselves, much as we watch a movie without thinking about the camera work or actor interpretations of the screenplay. As Peter Gabriel points out in The Cinema Show regarding the use of cosmetics: "Concealing to reveal."

Let's consider the "The edge of the night" from MOMENT OF FREEDOM: Selected Poetry. First off, two notes: the title Moment of Freedom is ironic in that the title indirectly states, a lifetime of slavery to the "moment of freedom", much as the term "a cloudless clim" from Lord Byron, must incorporate "cloud" to denote an empty sky: an image to convey emptiness rather than simply using the unpoetic "empty" to state such. Second, the poem's title capitalizes the article but not the noun or prepositional phrase, combining poetic license with standard grammatical rule (namely "The", the first word in the line, must be capitalized). The intellectualizing has begun; William flaunts the world's rules by obeying them as he pleases, this, a moment of freedom.

To discuss William's deliberate misuse of grammar would be folly as it is part of the pursuit to reach the reader. Note also his use of metaphor and litotes. To say simply: "a corpse" is not in his vocabulary; he metaphorically says "dinner" and the diner, death ("the dead!"). Knowledge is life, and life is accepting death: "The darkness comes from knowing nothing is ours, except death...." The first slip into litotes comes from a shift into prose from the metaphor: "...to wake with a sore splitting back from the cold floor in borrowed clothes and eyes..." and with the "borrowed...eyes" shifts back to poetry and metaphor. These are very aesthetic acrobatics.

Furthermore, in the line "To wake up and see the sun if not the glare from beyond" we see additional shifts with the sun at once literal and figurative (as that solar body we find upon waking and as a metaphor for the afterlife). William maintains the balance between shifts throughout the work and ultimately "time" becomes a "cannibal" eating us as we sleep and wake, with varying degrees of metaphoric intents. Thus, the final line of Part II captures this fatality of cannibalism of the self as William becomes the "I" of the poem and states the thesis with the "if", bringing together the personal and the intellectual in Part III: "The science of the mind corroded the body, blinded every mile I ever burnt in this life and the next if there ever were such a thing."

A work in three parts, "The edge of the night" is representative of the poetry throughout MOMENT OF FREEDOM. Think of the book as a complete poem with each individual poem making up the whole. I do not recommend jumping around reading individual works, but rather beginning to end, as one would read James Joyce's Ulysses or William Burroughs' Naked Lunch. It is a work worthy to be mentioned with these modernist authors." 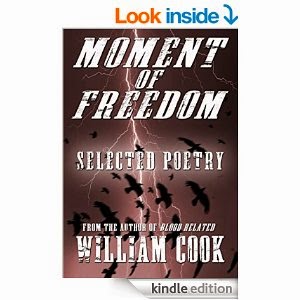 The next free title is a horror short called 'CREEP' - here is another review that appropriately sums up this collection:


An origin story drenched in blood, "Creep" is an excellent precursor to an intriguing premise. By reading the title and the story synopsis, readers will know what to expect from this tale, but Cook's method of introducing his new brand of madness is where the intrigue lies.

Cassandra's development is the result of the detailed writing that Cook uses to capture the sensory deprivation and overload; emotions broil over in stomach-churning revelation. The story is a moment of self-discovery for Cassandra; with so many torture movies and stories on the market, the audience is quite familiar with this scenario. However, this story is the chrysalis; Cassandra's physical and emotional transformation is revealed through the amount of detail Cook pours into the environment around her. On the literal level, "Creep" offers visceral scares and bestial symbolism to explain Cassandra's moment.

Read by itself without any further context, "Creep" stands by itself well enough. It's a quick read if you allow yourself a quiet, dark place to read with low light. Cook continues to improve as a writer; there are still some moments / actions that are characterized through "telling" rather than showing, but this remains a personal preference of mine. Personally, I don't think Cook necessarily has to include this origin story in the upcoming novel; it can be referred to in scattered flashback moments, because this is rather a complete episode in Cassandra's life.

Considering what the story is designed to achieve/explain, Cook delivers upon his promise: the terror is personal and life-changing for Cassandra, and he explains why with well-crafted imagery and moments of revulsion.

Side note: Cook included one of my favorite scenes from his highly recommended novel, "Blood Related." There's enough entertainment value in this package to turn lovers of serial killer horror into William Cook fans." 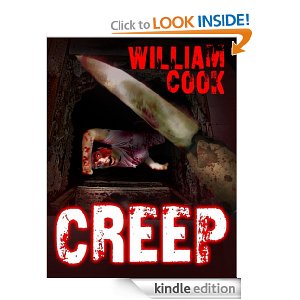 And finally, the last free title is a Young Adult supernatural thriller called 'Dead and Buried.' Here is another customer review to give you an idea of what it's all about:

"5.0 out of 5 stars A Novella Packed with Punch
March 30, 2014 By Diane J
Format:Kindle Edition|Verified Purchase


I just finished reading this book and was not disappointed! I know it is a young adult thriller, but it is a great read for anyone fond of horror, the underdog finally getting his chance at retribution, and a good ghost story. I read the whole thing in one sitting because it was so good. It is not for younger readers, the youngest I would recommend is probably 13 or 14, because it is quite graphic in places but the theme of the story allows for that factor. Donny is a very tortured young man and he does the best he can to cope with a cruel world not of his making. This will grab you and keep you enthralled until the end." 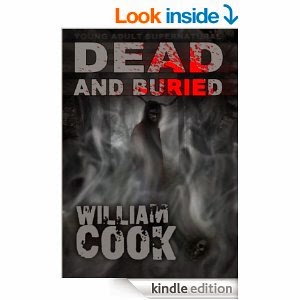 Merry (early) Christmas - go for it! Please share this post and if you like the work please take a moment to say thanks and drop a quick review when done.