The previous interviews I conducted in the popular series, 'Secrets of Best-Selling Self-Published Authors,' were such a hit with visitors to this site I decided it would be crazy not to continue them. I have got some wickedly good interviews lined up for you over the next month, including VIP guest interviews from best-selling indie authors Iain Rob Wright, Armand Rosamilia, David Moody, Jeremy Bates, Michael Bunker, J. Thorn, Michael Bray, Michael J Sullivan, Ruth Ann Nordin and Michale Thomas. If that wasn't enough, I hope to have a book from the first series of interviews ready for release by the end of August. The book is titled (surprise, surprise!) 'Secrets of Best-Selling Self-Published Authors.' It contains all the authors interviewed in the first series (Russell Blake, April M Reign, William Malmborg, Mark Edward Hall, Matt Shaw, Michaelbrent Collings and Matt Drabble). Included in the book is a lengthy analysis of their recommendations for self-published authors and for those thinking of self-publishing, along with useful tips and resources. The book will be available for pre-order early August and is essential reading for those interested in self-publishing. Make sure you subscribe now to get on the mailing list for all updates and new-release information. 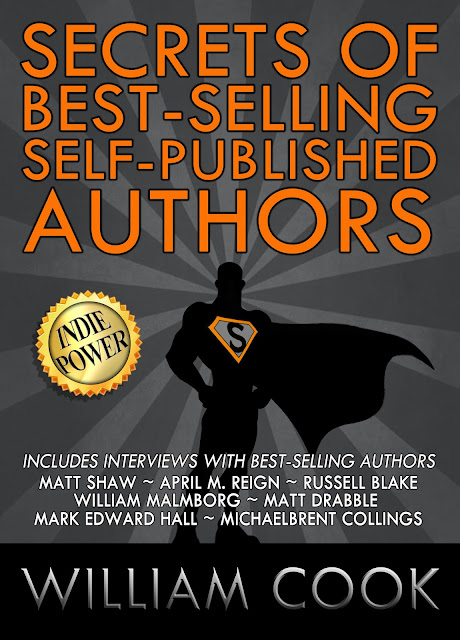 Right, let's get into it. Today's special guest, is best-selling indie author, Iain Rob Wright. Iain is from the English town of Redditch, where he worked for many years as a mobile telephone salesman. After publishing his debut novel, THE FINAL WINTER, in 2011 to great success, he quit his job and became a full time writer. He now has over a dozen novels, and in 2013 he co-wrote a book with bestselling author, J.A.Konrath. The three most important things in his life are his wife, his son, and his fans. His work is currently being adapted for graphic novels, audio books, and foreign audiences. He’s an active member of the Horror Writer’s Association and a massive animal lover. Here's the interview: 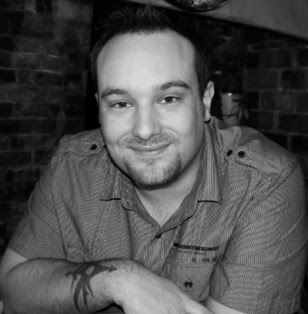 Who are you and where do you come from? Do you think that your life experience has gone some way towards making you a successful author in your chosen genre?


I am Iain Rob Wright, a horror author. What has helped make me a successful author is that I am a fan first, writer second. My books are the things, as a horror fan, that I would like to read.


My inspiration comes from the other people in my genre. I read a lot and learned to love horror from enjoying the work of Stephen King, Richard Laymon, James Herbert and many more. I also love movies and television, and get many ideas whenever I watch a particularly original film. After watching Legion, I gained the idea for The Final Winter, my debut novel.


I think readers point out my characters as the part they most enjoy. I reuse characters across multiple books and like to have them change and grow. I also try to be original with my ideas. All of my books are different and I don’t just write about one thing.


Your first book, ‘The Final Winter,’ was very successful – how did you achieve such an impact with your debut novel and have you managed to replicate it since?


I have no idea. I published it and got a few sales, and then those sales kept increasing. What helped me in the early days is gaining a couple of really amazing fans who recommended my work a lot. They helped get my name around very quickly. A writer is nothing without readers, so I was very lucky to get those early fans.


You have enjoyed best-selling status on Amazon and have had your books adapted for Graphic Novels, Audio Books and foreign audiences – is there a particular moment in your career as an author that you realized that you had done something right to get where you are now? Can you pinpoint what it was that spiked your success to date?


My second book, Animal Kingdom, was published by an American Press. Eventually I bought the rights back and self-published it. I’ll let that speak for itself.


Dead Pixel Publications is something I have just become a part of. It is a collection of authors all working beneath a single banner, dedicated to finding mutual success. It is very important to have allies in this business and far easy to find success with help. I’m always very happy to offer assistance so joining a group such as DPP made sense to me. It’s not vital for an author to start their own publishing group, but it is important to become a brand in their own right. Stephen King is synonymous with horror because his name has become a brand. That’s what an author should aim for.


Do the best with what you have. In the early days I did my own covers and editing. I made a few sales and put that money into hiring artists and editors. As I earned more money I hired better artists and editors. You can scale your business up, but you will only get back what you put in. It hurts paying $500 to an artist, but the cost will pay for itself when you reap additional sales.


Bookbub is the current number 1 sales promoter, but I have been testing Facebook ads with mixed success. The biggest mistake I made in the last few years was not maintaining an mailing list. It’s a big focus for me now and it’s a big tool being able to email a thousand people each time I have a new release. Trying new things is the key to success. You look at guys like Hugh Howey, J.A.Konrath, and Mark J.Dawson, and you see that they all got rich by being the guy to hit upon something first. Find the opportunities for yourself and you will reap maximum advantage. If you are a follower then you are forever chasing diminishing returns . . .

Hi everyone  - hope all is well with you and life is going swimmingly. I have some exciting news to share today. Finally, the redux version of my debut novel, Blood Related, is available in both print and EBook exclusively through Amazon (U.S. & U.K. links below). After getting the rights back from my previous publisher I decided to self-publish through my imprint, King Billy Publications. With much research and debate I decided to go for it! I had it professionally edited and formatted, I cut and trimmed and shaped it, into a more fast-paced, tension-filled, thriller novel. I am very happy with the results and hope you guys will like it too. If you're uncertain, check out the free preview on Amazon to get a taste for the novel. Hopefully you'll enjoy it enough to leave a review which would be a great help (wink, wink). I have set the price low for the first month on Amazon ($2.99 - Kindle, $12.99 - Amazon print) so get in quick before it goes up at the end of August. 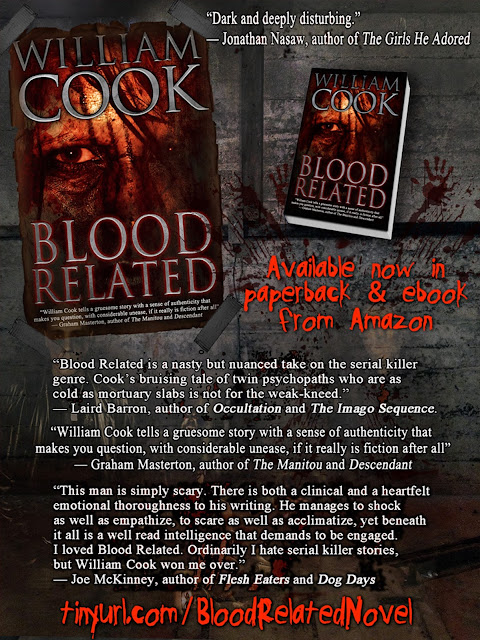 I have had the good fortune to receive some fantastic blurbs/reviews from some of the leading authors in the Horror and Thriller genres. This is what Graham Masterton, best-selling author of The Manitou and The House That Jack Built, says about Blood Related: "William Cook tells a gruesome story with a sense of authenticity that makes you question with considerable unease if it really is fiction, after all." Joe McKinney is another best-selling author who read Blood Related and offered this fantastic blurb: "This man is simply scary. There is both a clinical thoroughness and a heartfelt emotional thoroughness to his writing. He manages to shock as well as empathize, to scare as well as acclimatize, yet beneath it all is a well read intelligence that demands to be engaged. I loved Blood Related. Ordinarily I hate serial killer stories, but William Cook won me over. He is a unique and innovative talent."

*Personal invitation: if you are a best-selling (paid, not free rankings) self-published author and would like to be part of this project, please leave a comment below or email me here.