New Review up for Moment of Freedom - by William Cook

First of all, apologies for the lack of posts lately. I have been extremely busy with my other projects and have been neglecting poor old poetry a bit! You can see what I've been up to at my main website http://williamcookwriter.com.
I will be migrating this site to the main one above shortly but will leave a forwarding address so to speak. I recently received the best critique of my poetry that I have ever received. Please check it out below and make sure to visit Anthony Servante's excellent site about Literary Darkness - always something interesting and well-written to consider there. Enjoy!
************* 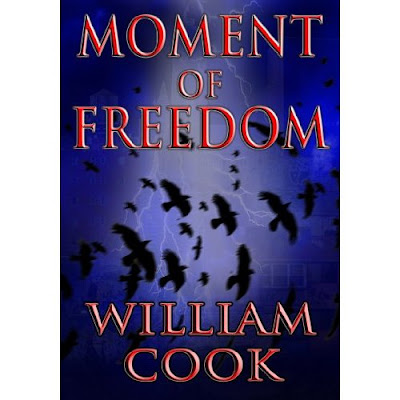 William Cook joins the Modernism School of Poetry. From Wiki: “For the modernists, it was essential to move away from the merely personal towards an intellectual statement that poetry could make about the world.” Thus William combines a writing style of prose and poetry to weave an intellectual tapestry, slipping his words in and out of subjective and objective observations, pulling and pushing the reader to envision the completed tapestry while savoring the in’s and out’s of the words themselves, much as we watch a movie without thinking about the camera work or actor interpretations of the screenplay. As Peter Gabriel points out in The Cinema Show regarding the use of cosmetics: “Concealing to reveal.”

Let’s consider the “The edge of the night” from MOMENT OF FREEDOM: Selected Poetry. First off, two notes: the title Moment of Freedom is ironic in that the title indirectly states, a lifetime of slavery to the “moment of freedom”, much as the term “a cloudless clim” from Lord Byron, must incorporate “cloud” to denote an empty sky: an image to convey emptiness rather than simply using the unpoetic “empty” to state such. Second, the poem’s title capitalizes the article but not the noun or prepositional phrase, combining poetic license with standard grammatical rule (namely “The”, the first word in the line, must be capitalized). The intellectualizing has begun; William flaunts the world’s rules by obeying them as he pleases, this, a moment of freedom.

The edge of the night

A table spread in a tomb, dinner for the dead

the dead! Why did you pay a visit to my eyes last night?

Night is the time for angels of dreams

we who, each of us, will one day return

to our hungry mother the grave. The darkness comes

from knowing nothing is ours, except death

takes bites out of my heart. O Asclepius pupil

to my dead love, and I forever understudy

will attempt some sort of attainment

to wake with a sore splitting back from the cold floor

in borrowed clothes and eyes, lent by a saint

giving at the same time an encompassing embrace

‘Friend,’ is all he said in tears, heart big enough to feed

this dead world. To wake up and see the sun

if not the glare from beyond, glittering

on broken glass, beside stretched roadside

where some had sprayed symbolic worlds and signs

scars full of flowers – to wake is to see

again this unusual world, whose secret cannot be known

until we enter the sky, or the earth

takes the edge off the night, the memory of your smile

Judging this town of sleep, I found it had already been judged

the Lord on his axe-cut cross of cypress

he is an incurable domestic bore

a family man, who never swore a word

an only child with a hollow mother

full with the carved cares of a household

wearing his poverty as a coat of arms

for eyes to look upon that beheld no bravura of vision.

and all of this in fidelity to death

it was the same old same old, the hard husk of the ego

won’t ever resolve, yet grinds down hard internally

into the swirl, the wine bitter-soaked seed

labouring lie -- vice is kindled, burned in loins that melt

peculiar smiles alive, of all hope

has gone to explore the forlorn desert all alone

far away from the security of grim towns

where a girl is safe searching numbly in the comfort of fear.

You have gone or strayed away, never to be found

I sit and hear sour hiss of traffic calling

this burned and gutted ghost, vague semblance of time

electric dream/confused state of everyone

greedy for dead love, drain her life, her soul

from every side for me. Greatest dribbling cannibal

Torn in two, I stand between, the idol and the grave

of this world, know anything – nor do I want to

but I have misled the past and will do so again

bring the teachers to the fore, let them stand

and be accounted as emperors of their own disease

and demise. As the sky claps the earth -- wrings blood

from all rocks and far away I fly, every day

from the storm in the brain. The science of the mind

corroded the body, blinded every mile I ever burnt

in this life and the next if there ever were such a thing.


To discuss William’s deliberate misuse of grammar would be folly as it is part of the pursuit to reach the reader. Note also his use of metaphor and litotes. To say simply: “a corpse” is not in his vocabulary; he metaphorically says “dinner” and the diner, death (“the dead!”). Knowledge is life, and life is accepting death: “The darkness comes from knowing nothing is ours, except death….” The first slip into litotes comes from a shift into prose from the metaphor: “…to wake with a sore splitting back from the cold floor in borrowed clothes and eyes…” and with the “borrowed…eyes” shifts back to poetry and metaphor. These are very aesthetic acrobatics.

Furthermore, in the line “To wake up and see the sun if not the glare from beyond” we see additional shifts with the sun at once literal and figurative (as that solar body we find upon waking and as a metaphor for the afterlife). William maintains the balance between shifts throughout the work and ultimately “time” becomes a “cannibal” eating us as we sleep and wake, with varying degrees of metaphoric intents. Thus, the final line of Part II captures this fatality of cannibalism of the self as William becomes the “I” of the poem and states the thesis with the “if”, bringing together the personal and the intellectual in Part III: “The science of the mind corroded the body, blinded every mile I ever burnt in this life and the next if there ever were such a thing.”

A work in three parts, “The edge of the night” is representative of the poetry throughout MOMENT OF FREEDOM. Think of the book as a complete poem with each individual poem making up the whole. I do not recommend jumping around reading individual works, but rather beginning to end, as one would read James Joyce’s Ulysses or William Burroughs’ Naked Lunch. It is a work worthy to be mentioned with these modernist authors. 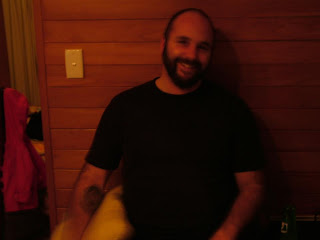 William Cook
William Cook is a writer of the macabre from New Zealand, a small antipodean island group in the South Pacific. When not writing, he looks after two small daughters and designs book covers that are designed to scare the hell out of people.
He can be reached at:
http://www.amazon.com/William-Cook/e/B003PA513I/ref=ntt_athr_dp_pel_1
Reposted from: http://servanteofdarkness.blogspot.com/