Firstly, apologies for the lack of posts lately - some of you may know that I recently began my Masters in English Lit. program and it is proving to be the inevitable time-guzzler that I thought it would be! So, less fiction, more academic writing . . . Grrrrrr. Despite the time consuming factor, I am learning a lot as I go and it's valuable information which will hopefully benefit my writing. The topic of my thesis is: American Postmodern Serial Killer Fiction, and I'm analyzing the following select works - Jim Thompson’s The Killer Inside Me, James Ellroy’s Killer on the Road, Brett Easton Ellis’s American Psycho, Poppy Z. Brite’s Exquisite Corpse and Joyce Carol Oates’s Zombie. Here's a slice of the intro - as you will notice, the style is not my usual pared-down prose. Bear in mind that this is the first draft, but you get the idea:

"The vast body of published texts, which constitute the genre of serial killer fiction, reveal common narrative technique and tropes that signal a prevalence of clichéd formulaic novels representing the majority of works within this genre. However, amongst this stylistic and thematic majority, works exist that extend the boundaries of serial killer fiction through the import of different genre concerns and attributes. This thesis considers the impact and importance of these works and how they have influenced the stylistic and thematic direction of the genre as a whole. Focussing on twentieth century American post-war serial killer fiction, this study examines select works to exemplify aspects of the narratives that directly, or indirectly, transform, challenge and critique the genre conventions in which they are written. Of primary concern is the charting of the trajectory of the genre as a postmodern phenomenon, the evolution and expansion of the genre in terms of its popularity with the reading public in line with the growth of media interest in factual representations of serial killers, and the growing interest in the genre and its possibilities by those authors who usually write outside of it."

Right, now my excuse is out of the way we can get down to the good stuff. I have recently discounted a few of my titles so I thought I'd share it with you here before the price goes up again. Here are the bargains: 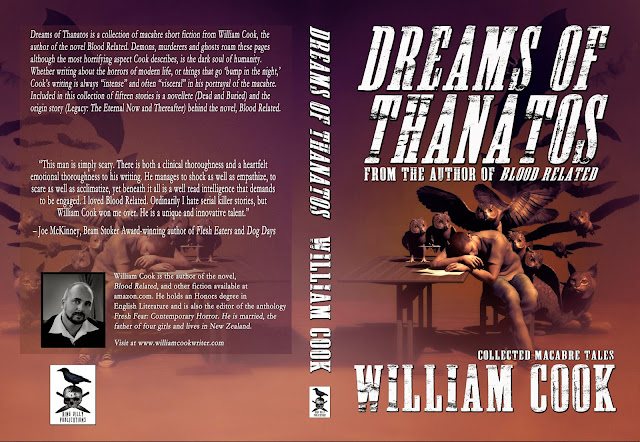 Discounted to only $0.99 for a limited time - grab your copy now! (U.S & U.K. links below) - Dreams of Thanatos: Collected Macabre Tales. (250 pgs)
Supernatural demons, murderers and ghosts roam these pages although the most horrifying aspect Cook describes, is the dark soul of humanity. Whether writing about the psychological horrors of modern life, or things that go ‘bump in the night,’ Cook’s writing is always “intense” and often “visceral” in his portrayal of the macabre. Included in this collection of fifteen stories is a novelette (Dead and Buried) and the origin story (Legacy: The Eternal Now and Thereafter) behind the novel, Blood Related.
Recommended for adult readers only. Contains scenes of psychological and supernatural horror
AMAZON U.K. - http://tinyurl.com/hv2a9t9
AMAZON U.S. - http://tinyurl.com/h97n2uj
This book is also available FREE to all new subscribers of this website - if you are not already subscribed, why not grab a free copy here instead?

The second discounted title is the popular collection I edited, Fresh Fear: An Anthology of Macabre Horror. I have reduced the price and the kindle version is $2.99 for a limited time. 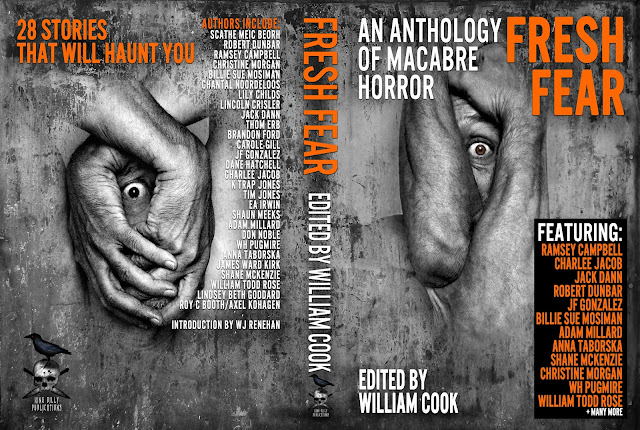 FRESH FEAR: An Anthology of Macabre Horror is a collection of horror from some of the genre's best writers of dark fiction. (Please share this post with your pals)

With over 450 pages, Fresh Fear is packed with stories written by both masters and up-and-coming maestros of the horror genre. Tales steeped in psychological horror sit alongside visions of strange worlds and fantastical landscapes drenched in blood. 'Quiet horror' sits comfortably next to more visceral portrayals of the monsters that lurk deep within the human heart. Sir Arthur Conan Doyle, famously once said, "where there is no imagination there is no horror" - the horror expressed by the authors in Fresh Fear show that imagination is indeed tantamount to excellent story-telling.

Prepare yourself for 28 tales of fear-inducing horror from some of today's best authors of dark fiction.

Well that's about all for now but make sure to visit again soon and share this post with your pals. Thanks for reading.