A bit bored tonight, so resurrected/exhumed a relic from my Uni years. A bit wordy in my opinion but there you go! Have a great week. 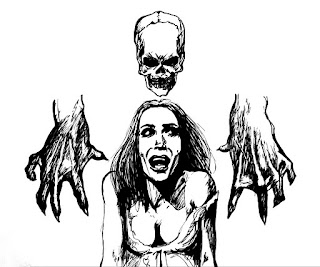 The Use of Imagery in Blake's Visual Poetry
In relation to the function of imagery, in the Songs of Innocence and Experience, William Blake's intentions are difficult to define. His subtitle to the Songs offers some direction, suggesting that the Songs show “Two Contrary States of the Human Soul”. ‘Innocence’ and ‘Experience’ are not mere concepts, but entities of energy and reality that are represented by the characters, geography, symbols, archetypes, and imagery, showing contrary states yet also depicting a coexistent unity and dependence. The function of Blake's vision and imagery in the Songs appears to be to relate preconceived conventional notions of human imagination, spirituality, morality, and physical experience, to the conceptual realms of the reader in order to provoke imaginative response and query of these notions.


What becomes evident from the Songs of Innocence as a sequence, is that it is a depiction of innocence in its different forms, and that it acts as the symmetrical foil to the varied Songs of Experience. In ‘The Blossom’, connotations in the imagery of this lyric function as symbols of the innocent apprehension of sexual maturity (in the first stanza) and experience, with its image of the blossom anticipating the Sparrow's and Robin's embraces:

Merry, Merry Sparrow!
Under Leaves so green,
A happy Blossom
Sees you, swift as arrow,
Seek your cradle narrow
Near my Bosom. (1-6)

The first stanza is masculine in the aggressive searching nature of its language, yet it conveys an androgyny, both male and female in its pre-experiential state of innocence and immature desire. The second stanza’s imagery and language conveys a fragility and femininity in the emotional representation of pain and experience, subtly suggesting that the more emotional and feminine nature, is closer to nature and the heart (of God). These symbolic associations are evident, but not definitive; the poem can also be seen as a depiction of innocent love, merriment, sadness and growth, within nature.


The second stanza’s imagery shows the more experienced and sexually desirably Robin, (red breast) emotionally upset at the loss of innocence and the experience that places it nearer the ‘bosom’ (of Abraham? Luke 16:22). The ‘happy blossom’ of the first stanza, symbolises nature and the flowering transition from innocence into experience. It is ever present, watching and listening to the contrary states of emotion that characterise binaries of human existence and development:

The personification of birds makes the reader associate the human-like characters of ‘sparrow’ and ‘robin’ with their natural. The sparrow is an innocuous bird, skittish and childlike in character (both vocally and playfully) and size. The robin is a larger bird, whose redbreast and singing voice gives it prettiness and cosmetic maturity. The ‘redbreast’ could symbolise the distinction of sex and the blush of sexual experience and shame.


This Freudian interpretation seems justified in context with the illustration, which accompanies the poem, which suggests an awakening of sexual innocence and experience. Naked angels frolic on the flame-like limbs of a strange tree (of life?), in the top branch sits two winged figures locked in an embrace. No birds are depicted and no apparent ‘blossom’. The verse alone could be a simple nursery rhyme (without the illustration a simpler, reading could be justified), but why choose specific species of birds and have the position of the speaker in an abstract state? Is the narrator the tree, or God, or someone who just cares for birds? The function of the imagery in this instance is to make the reader question that which seems straightforward and search for depth by using imagination.


In Songs of Experience we find poems like “Ah! Sunflower”, that convey a state of experience that yearns for other experience of a freer, more spiritual, nature. The flower which traditionally looks like the sun and always turns its face to the sun, yearns to escape, partly from the sun and from what the sun represents: time and possibly the great timekeeper, God:

Ah, Sun-flower! weary of time,
Who countest the steps of the sun;
Seeking after that sweet golden clime,
Where the traveller’s journey is done. (1-4)

Where the sunflower seeks to go is a region beyond time, a place of rest and completion, of exhausted desire, of spiritual ecstasy and experience rather than deathly chastity. The destination aimed for is perhaps less important than the fact that the sunflower, rather than joyously rejoicing in life, is weary of physical experience and the constant looking (a sort of forced devotion) to “the sun”:

Where the Youth pined away with desire,
And the pale Virgin shrouded in snow,
Arise from their graves, and aspire
Where my Sun-flower wishes to go. (5-8)

What has been confined is released (e.g. innocence, the imagination) from the position of supplication, by the wisdom of experience, and by the contemplation of that beyond the conventional and physical realities of everyday life. The poems, in effect, resurrect the child in the adult through the association of imagery and emotion, and the encouragement of individual creative thought.


A dominant feature of the Songs of Innocence and Experience (especially the Songs of Innocence) is the unifying and thematic direction toward simplicity and harmony, through spiritual, imaginative, and conceptual enlightenment and self-realisation. However, the simplicity of the verse is superficial and belies a complexity, which is profound and conceptually challenging. The opening stanza from “The Tyger”, in the Songs of Experience sequence, closely resembles the common children’s song “Twinkle, Twinkle Little Star”, yet it poses questions traditionally intended for theologians and art critics:

Tyger! Tyger! burning bright
In the forests of the night,
What immortal hand or eye
Could frame thy fearful symmetry? (1-4)

The speaker questions the vision rhetorically, as if from a safe distance (because he is not directly addressing a physical entity), with enough time to pose some profound questions. The main question seems to be of an aesthetic nature: who could aspire to immortality, by attempting to render a vision of the original unified (‘symmetrical’) entity who represents the energy of creation and artifice. “The Tyger”, in this respect, seems to be a discourse on aesthetic (and ethical) responsibility in issues of divine and spiritual representation


The animal and symbolic nature of the image of the tiger, functions as a unified embodiment of good and evil, transcendent in its spiritual and instinctively natural energy and character. This image of a spiritually and physically justified (because of its existence and creation) sublime being creates a paradox between existentialism and creationism. The tiger is the symbolic representation of innocence and experience combined and forged in a flux of sublime energy, capable of invoking fear and awe. In combining tones of terror and awe at a being that could create the tiger as well as the lamb, the poet celebrates creation and its transcendence of human good and evil. This realisation of the strength and power of creation, is an aesthetic realisation as well as a spiritual one, for the narrator it is the moment of visionary truth and epiphany. For the reader it is the beginning of doubt and the search for answers to the questions provoked. The “Tyger” does not afford us an image of illumination or revelation like it does to the speaker, yet it does serve to function as the symbolic antithesis that drives the speaker to seek a deeper truth of vision:

Tyger! Tyger! burning bright
In the forests of the night,
What immortal hand or eye
Dare frame thy fearful symmetry? (20-24)

The function of the imagery of “The Tyger” is once again to provoke query in the mind of the reader: how could the creator make something as terrifyingly sublime as the Tiger? Is the Tiger not created in God's own image, and is not the Tiger also a symbol of evil energy? These questions lead to speculation about the wisdom of a God who can create such a terrifyingly destructive creation (e.g. a Tiger), contrary to other creations of beauty and peace (e.g. ‘The Lamb’ in Songs of Innocence).  They are essentially questions of creation and theological authority on first reading, but when read alongside the illustration, this reading becomes not as strongly critical of a God that creates ferocious beasts: the tiger looks like a friendly pussycat!


In the final stanza of the poem, the transition from the word “could” in the first stanza to the word “dare” in the sixth, suggests a transcendence of mere innocent lament and wonder to the position and mutinous contemplation of proposal and challenging experience and divine authority. There is a sense of the predator in the speaker (which is ironic as the subject of question is a tiger); a sense that this overbearing creation of oppressive energy can be harnessed and ‘framed’. There is a sense of the limitations of the power of such a representation, ramifications if such a possibility exist are on the largest of spiritual and imaginative planes, burning constantly in the mind (imagination) of the speaker: “in the forests of the night”. The “forests of night” also suggest that this discourse and vision appears in the context of a dream; whether ideological or aspiration, or merely a fantastical thought, it is left up to the reader to decide.


In Songs of Experience, we are led to question the justification of oppressive disciplinary idealism and subjugation, present both in the separate cultural and natural archetypes that confine the human form to insignificance and spiritual decay.  Blake’s use of imagery, that symbolises cultural and natural oppression, functions to show inadequacy and inhumanity as such. It then unites the experience with energy that fuels the imaginative vision to new invention and hope, as the boundaries of physical confinement collapse, with the freedom of the expanded imagination.


The Songs of Innocence and of Experience contain poems, which combine to offer profound insights into humanity. The images, emotions, and language of the poetry give vent to “the voice of one crying in the wilderness”, naked and alone in the decision to challenge the structure of society and belief epitomised by Urizen (your – reason). The function of the imagery in Blake’s poems is to create new experience, both visually and conceptually. There is an element of individual relativism and truth in the poems, generated both from the speaker’s experience and vision and the reader’s subsequent subjective experience of the imagery and verse.


The function of the imagery, in the majority of William Blake’s verse and illustrations, serves to provoke contemplative thought and imaginative perception. The imagery is profound and descriptive of a lavishly structured order of being, placing the creative imagination as a fundamental basis for human experience and reality. Blake’s imagery emphasises unity between heaven and earth, and it is in this binary dependence where images abound and meet, fluxing in a multiplicity of symbolic vision. This unity also represents the physical and the spiritual (or mental plane) combination of imaginative understanding. This intermediary position is the aesthetically creative centre of Blake’s world, and it is this place that generates the essential reality and function of the imagery of his poetry. 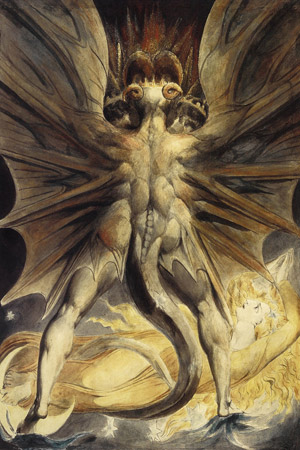