Stoked to have my work appearing in Deaf Mute Press' 'Sketchbook of the Dead' - unleashed this month.

Sketchbook Of The Dead will have it's debut at Planet X ...

From 1-3pm at Planet X Comics in York, Pennsylvania. 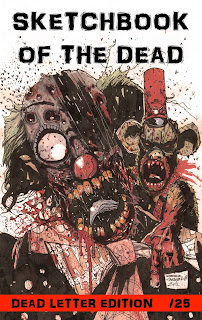 Sketchbook Of The Dead will have it's debut at Planet X Comics!
This is a special limited edition of the sketchbook limited to only 25 copies.
The best part? it's only $2.99!
Featuring the artwork of:
Stefano Cardoselli (Heavy Metal, Vincent Price Presents)
Mark Lone (Rise Of The Mutant Underground, Tales From The Dead)
Scott Conner (SFX Artist for numerous best selling movies)
Amber Russell (Painter)
William Cook (Artist and Writer)
And
Andrew Villar (Plan B Comics & Ambush Comics Philippines)